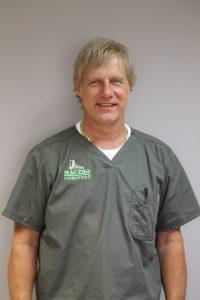 Jamie Maczko is the youngest son of Jim and Betty Maczko, the original owners of Jim’s Shoe Clinic, and the place where Jamie first became acquainted with the importance of healthy feet.

Born and raised in Sarnia, Jamie was an avid hockey player and athlete. He graduated from Northern Collegiate in 1978 and subsequently was accepted at the University of Western Ontario where he graduated with a Bachelor of Arts Degree in Physical Education in 1981.

The following year, Jamie worked with his father at Canadian Orthopedic Supplies in Sarnia and subsequent to that, was accepted into the Chiropody program at the Michner Institute in Toronto. Jamie graduated as a Chiropodist in 1984 and worked for one year in the Teaching Clinic at Toronto General Hospital before returning to hometown Sarnia in 1985.

In 1985 Jamie introduced the profession of chiropody to Sarnia/Lambton and helped to develop and open the Chiropody Clinic at St. Joseph’s Hospital, the predecessor to Bluewater Health Centre. He was employed as the senior Chiropodist until the health centre closed the clinic in March 2007.

Throughout the years, in addition to his hospital position, Jamie has always provided additional services through Maczko Chiropody and Orthotic Centre on a part time basis. Following the closure of the Bluewater Health Chiropody Clinic, Jamie opened a full time private practice in a custom built office at 559 Exmouth Street. This beautiful treatment centre provides quality services in a relaxing ground floor facility.

Jamie has been married to his wife Kathy for 38 years and are the parents of three amazing children.

Sarah, a graduate of the University of Guelph, employed at Blackberry as a Senior Analyst. She is married to Chris and they have five children, Ava, Paige, Sadie, Piper, and Zack.

James, a graduate of York University Toronto, with an Honours Fine Arts Degree in Theatre and Television. He is an actor, married to Desiree with a daughter Olive, and live in Niagara Falls.

David, a graduate of Lambton College Instrumentation program is employed at Arlanxeo in Sarnia. He is married to Erica with a son Ryder, and a daughter Skyla.

Chelsea Bell is the newest chiropodist to join us here at Maczko Chiropody and Orthotic Center. Chelsea is a recent graduate from the Chiropody program at The Michener Institute of Education at UHN gaining both Honours and the silver award for academic excellence, as well as mentoring and tutoring her fellow peers throughout this program.

Before pursuing more education, she originally went to the University of Guelph graduating with a Bachelor of Science degree with Honours in Human Kinetics. This allowed Chelsea to pursue experience in the physiotherapy field where she worked as an assistant to physiotherapy treatments in both private practice and long-term care. It was through this line of work she found a passion for health care and saw the demand in foot health and education needed in her hometown. She has a keen interest on how feet impact the human biomechanics in everyday life and during specific sports, as well as surgical procedures to help with chronic conditions like ingrown toenails.

In addition to her chiropody interests, Chelsea is a sports enthusiast who from a young age and to this day still plays a variety of sporting activities like basketball and volleyball. She was born and raised in Sarnia, Ontario and has more recently put down roots in her own residence which she shares with her significant other and furry children. 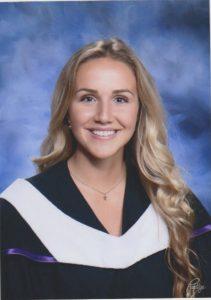 Throughout our lives our feet are subjected to endless wear and tear and are often overlooked. For this reason, foot health and education are a necessity for everyone. This is something that new chiropodist, Allison Deery, is hoping to provide to the residents of Sarnia, Ontario. Allison is a recent graduate of the Chiropody program at the Michener Institute of Applied Health Sciences at UHN where she graduated with distinction. Prior to her graduation Allison worked as a student resident in the Michener Chiropody Clinic in downtown Toronto and was a mentor to lower year chiropody students.

After growing up in and completing high school in Sarnia, Ontario, Allison completed 7.5 years of post-secondary education to achieve both a Bachelor of Arts Honours Specialization in Kinesiology from Western University and an Advanced Diploma in Chiropody. Growing up Allison was very active in athletics. It is because of this that she has always had a passion for health and knew that she wanted to pursue a career in health care. After visiting a former Chiropodist in town for her own foot assessment, Allison became very interested in the work that chiropodists do and saw the demand for foot health expertise in Sarnia.